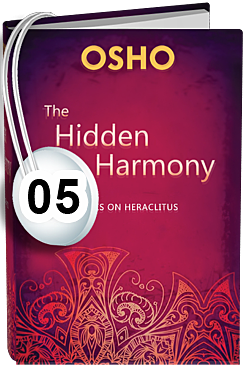 "Pythagoras was a contemporary of Heraclitus and he is more known than Heraclitus. In the histories of philosophy Pythagoras is a milestone. He collected much, he knew much, but without knowing anything at all. What did he do? Through scriptures, through teachers, through schools, ashrams, secret societies, he gathered knowledge. When you gather knowledge it becomes part of your memory – you remain unaffected. Your heart is not touched, your being is not even aware of what you have collected in your memory. Unless your being is touched and transformed, knowledge is ignorance and more dangerous than ordinary ignorance – because an ordinary ignorant person knows that he is ignorant, and a philosopher thinks that he knows. And once you become addicted to knowledge you will think your knowledge is knowing. Of course, you know too much, but deep down nothing has been known, nothing has changed; you have not evolved to a higher plane of being.

"Real knowledge consists in attaining higher levels of being, higher planes of being – not more knowledge, but more being. To be more, not to know more, is the real way. To know more, and not to be more, is the false way. Philosophers talk about things. They don't even have a glimpse of God, of moksha, of liberation, of other worlds, heaven and hell. Not only do they talk about it, they also talk very authoritatively – but they cannot deceive. They are deceiving nobody else except themselves.

"It is said that one day, walking through a cemetery, Mulla Nasruddin found a grave, the grave of the philosopher of the town who had died just a few days before. On the grave it was written: 'I am sleeping, I am not dead.'

"Mulla laughed loudly and said, 'You are deceiving yourself and nobody else!'

"But a philosopher deceives himself continuously. Instead of knowing he depends on information. Knowledge, when it is attained existentially, is authentic. For example: you can collect much knowledge about love without ever falling in love. Libraries are filled with much knowledge; you can go and collect all that has been said about love but about love is not love, about God is not God."
More Information