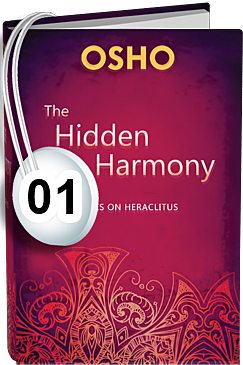 Everything Lives through Its Opposite

Details
"I have been in love with Heraclitus for many lives. In fact, Heraclitus is the only Greek I have ever been in love with – except, of course, Mukta, Seema and Neeta!
"Heraclitus is really..."
Osho continues:
"If Heraclitus had been accepted, the whole history of the West would have been totally different. But he was not understood at all. He became more and more separate from the main current of Western thinking and the Western mind.

"Heraclitus was like Gautam Buddha or Lao Tzu or Basho. The Greek soil was absolutely not good for him. He would have been a great tree in the East: millions would have profited, millions would have found the way through him. But for Greeks he was just outlandish, eccentric, something foreign, alien; he didn't belong to them. That's why his name has remained just on the side, in a dark corner; by and by he has been forgotten.

"At the moment when Heraclitus was born, precisely at that moment, humanity reached a peak, a moment of transformation. It happens with humanity just as with an individual: there are moments when changes happen. Every seven years the body changes, and it goes on changing – if you live for seventy years, then your total bio-physical system will change ten times. And if you can use those gaps when the body changes, it will be very easy to move in meditation.

"For example, at fourteen for the first time sex becomes important. The body goes through a biochemical change, and if at that moment you can be introduced into the dimension of meditation, it will be very, very easy to move because the body is not fixed, the old pattern has gone and the new has yet to come in – there is a gap. At the age of twenty-one, again deep changes happen, because every seven years the body completely renovates itself: all the old cells drop and the new cells come in. At the age of thirty-five again it happens, and this goes on. Every seven years your body comes to a point where the old goes and the new settles – and there is a transitory period. In that transitory period everything is liquid. If you want some new dimension to enter into your life, that is precisely the moment.

"In the same way exactly it happens also in the history of humanity as a whole."
More Information