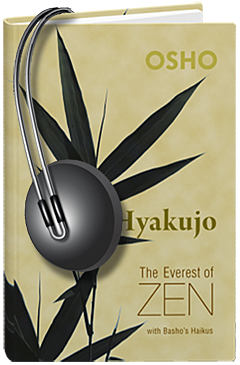 Hyakujo: The Everest of Zen, with Basho’s Haikus

Talks on Zen
Audiobook Series
$17.91
In stock
Hyakujo worked by creating situations where seekers were thrown back on themselves, forced to go beyond the mind. He also introduced work as meditation in his monastery.

Details
Hyakujo worked by creating situations where seekers were thrown back on themselves, forced to go beyond the mind. He also introduced work as meditation in his monastery.
Excerpt from: Hyakujo: The Everest of Zen, Chapter 1

“To understand Hyakujo, the first thing to understand is that enlightenment can only be sudden. Preparation can be gradual, but the illumination is going to be sudden. You can prepare the ground for the seeds, but the sprouts will come suddenly one day in the morning; they don’t come gradually. Existence believes in suddenness. Nothing is gradual here, although everything appears to be gradual; that is our illusion.

“In the past, science used to think that everything was gradual: a child gradually becomes a youth; the young man gradually becomes older. Now, we know that is not the case because of Albert Einstein and his discoveries about atomic energy. He himself was puzzled when he saw for the first time that the particles of an atom don’t go from one place to another place the way you go from your house to the market. They simply jump. And their jump is so tremendous that he had to find a new word for it: quanta – the quantum jump. It means the particle was in one place, A, and then suddenly you see it in another place, B. The path between was not traveled. A strange jump: you cannot see the particle between the two points. That gave him an idea that in existence, everything is jumping. It is just because the jump is so subtle that you cannot see it.

“Every moment, you are jumping toward old age. It is not a gradual thing. That you are older happens every moment, and there is no way you can find to rest in between the jumps ­– the jumps are so close.

“But you can prepare – and particularly for enlightenment, which is the ultimate quantum leap. You can meditate, you can go as deep as you can. You can find your center. And the moment you find your center, suddenly there will be a jump as if out of nowhere. The buddha has appeared: a buddha of pure flames.”