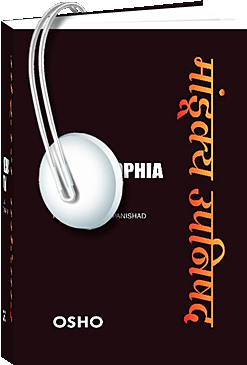 Talks on the Mandukya Upanishad
Audiobook Series
$31.84 Now $16.99 (Applied at Final Checkout)
In stock
Osho says there is no way to go beyond the Mandukya Upanishad, its message is eternal and represents the ultimate in human consciousness. While science dissects and divides, the Upanishad is a holistic, individual approach; a unifying vision.

Details
Osho says there is no way to go beyond the Mandukya Upanishad, its message is eternal and represents the ultimate in human consciousness. While science dissects and divides, the Upanishad is a holistic, individual approach; a unifying vision.
Excerpt from: Philosophia Ultima, Chapter 1

“The Upanishadic vision is that the universe is a totality, indivisible; it is an organic whole. The parts are not separate, we are all existing in a togetherness: the trees, the mountains, the people, the birds, the stars, howsoever far away they may appear. Don’t be deceived by the appearance, they are all interlinked, all bridged. Even the smallest blade of grass is connected to the farthest star, and it is as significant as the greatest sun.

“This vision remained the vision of a few mystics. It never became part of human consciousness. That’s why there is so much misery in the world, so much ugliness, insensitivity. People are not flowering; their hidden splendor, their imprisoned splendor is not freed. People are living imprisoned lives, chained. They contain infinity in them but they are not even aware of it.

“The Upanishad and its approach is individual. The word upanishad means sitting in deep communion with the master. It has nothing to do with the church. No church can ever be religious, all churches are basically political. You have to understand the definition: politics means society, collectivity; religion means individuality.

“But we have been conditioned to live with abstractions: society, humanity, love, God. These are all abstractions, empty concepts with no concrete reality behind them.

“The master has come home, the master has experienced the truth. The disciple is seeking, but the seeker has to be silent, utterly silent. It is not a question of asking questions because the ultimate questions can neither be asked nor answered; they are only transmitted – without asking, without answering. That transmission beyond words is the meaning of the word upanishad.”