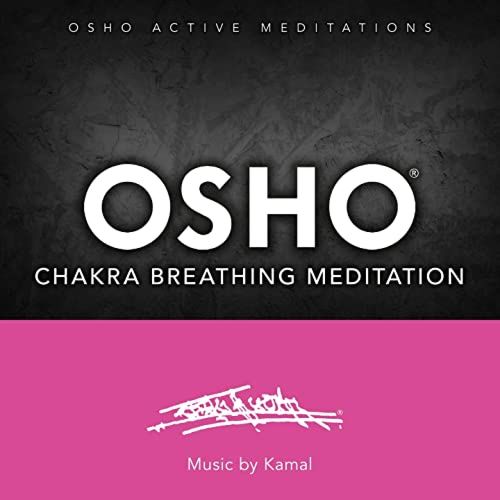 Music for Meditations
$0.00
In stock
This method uses deep, rapid breathing by the meditator along with music to open and harmonize the chakras while bringing awareness to them.
Add to Wish List
This active meditation uses deep, rapid breathing and body movement to open and bring awareness, vitality and silence to each of the seven chakras or energy centers, and thus into your life. The accompanying music and bells energetically support the process and signal the beginning of each stage.

The one-hour meditation is best done on an empty stomach.

Details
This method uses deep, rapid breathing by the meditator along with music to open and harmonize the chakras while bringing awareness to them.
Osho talks about breathing and chakras:
"If there is awareness with deep breathing the prana will expand and the life energy will start to rise upwards. Awareness is the key for rising upwards and unconsciousness is the key for falling downwards.

"If a person can come to awareness through breathing then he needs no other practice, this is enough – but it is very difficult. For twenty-four hours a day, whenever you remember, be aware of your breath. Nobody will know, it can happen quietly; nobody will ever know what you are doing. Jesus has said that your right hand should not know what your left hand is doing. This also is something that no one else will know about. Silently, along with your breathing, your remembrance will gradually grow. As the breathing becomes deeper and the remembrance becomes more profound, it will hit and raise your energy upwards through the spine.

"By constant practice one day this energy will reach to your sahasrar, the crown chakra. But meanwhile it will pass through other chakras and on eachchakra there are different experiences; on each chakra your life will be filled with a new light. And as your energy passes through each chakra, new fragrances, new meanings, a new significance will start to happen in your life, new flowers will bloom in your life.

"After experimenting many thousands of times, the science of yoga discovered what exactly happens on each chakra. I will give one or two examples so that you can understand, because the chakras have also been named according to the experiences connected with them.

"For example, yoga has named the chakra between the two eyes the agyachakra, the command chakra. It has been called the agya chakra because the day on which your energy passes through that chakra, your body and your senses will start obeying you. Whatsoever you desire will immediately happen. You will have command over your personality, you will become the master. Before your energy reaches to this chakra you are a slave. You will become the master only on the day your energy enters into this chakra. From that day onwards your body will obey you. Now you are obeying your body because in the place from where the body can be mastered you are empty. The energy is not in the place from where you can command it. This is why this chakra is called ‘the command chakra’;. All the chakras are named in this way. These names are meaningful because there is a particular state connected with each chakra."

Osho, The Message Beyond Words, Chapter #11