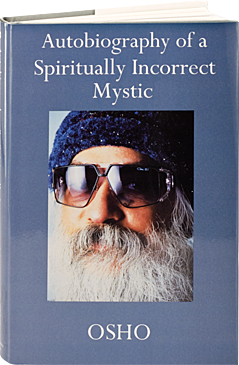 Autobiography of a Spiritually Incorrect Mystic

Two decades have passed since, in the words of his attending physician, Osho prepared for his departure from the body that had served him for 59 years ‘as calmly as though he were packing for a weekend in the country’. This volume is a recognition that the time has come to provide a historical and biographical context for understanding Osho and his work.

Who was this man? What is so powerful about his proposal that the media would need to ignore the hundreds of titles to his name on meditation and try to minimize his contribution with cheap epithets like the sex guru, the self-appointed God, the Rolls Royce Guru…. Wasn’t his own self-depiction of the Rich Man’s Guru or simply the Master provocative enough?

Osho is one of the most provocative spiritual teachers of our time. In the 1970’s he captured the attention of young people from the West who wanted to experience meditation and transformation. A decade after his death, the influence of his teachings continues to expand, reaching seekers around the world.
Chapter Titles
#Part 1: Just an Ordinary Human Being
#2: The History behind the Legend
#Part 2: Reflections in an Empty Mirror
#2: The Many Faces of a Man Who Never Was
#Part 3: The Legacy
#4: Appendix: Highlights of Osho’s Life and Work

Details
Osho in his own words on his life and teachings. Drawn from nearly five thousand hours of Osho's recorded talks, this is an indispensable work for understanding one of the most unusual mystics and philosophers of our time. This beautiful book comes with 16 pages of photographs.
Excerpt from: Autobiography of a Spiritually Incorrect Mystic, Chapter 1
"While listening to my childhood stories you should try to look for some quality – not just the story but some intrinsic quality that runs like a thin thread through all of my memoirs. And that thin thread is spiritual.
"Spiritual, to me, simply means finding oneself. I never allowed anybody to do this work on my behalf – because nobody can do this work on your behalf; you have to do it yourself." Osho


Booklist
"Osho’s posthumous autobiography affords a delightful glimpse into the life of one of the most outrageous twentieth-century spiritual leaders. Consisting of anecdotes that Osho told during his many lectures and classes, the book has a conversational tone that well conveys the sometimes infamous guru’s dynamic personality as it offers a sampling of his thoughts on meditation, enlightenment, sex, money, education, and the evolution of consciousness.
"Osho was not afraid to tackle the world’s major religions, pointing out inconsistencies and hypocrisy where he found them and simultaneously drawing together their best aspects into a synthesis grounded in meditation. Osho also answers some of the criticisms leveled at him for his seemingly outrageous behavior and his iconoclastic tendencies. He proves a fascinating man: a prolific writer and lecturer, highly educated, and deeply passionate about his own search for truth. Whether or not one is interested in Osho’s teachings or in the controversies surrounding his movement, his autobiography is entertaining, insightful and for some, perhaps, even enlightening."

Amazon.com:
Although he was criticized for being too enamored with the ways of the West, India’s spiritual leader Osho managed to garner global notoriety as the founder of "Dynamic Meditation." During his controversial lifetime (which ended – at least on this planet – in 1990) Osho was asked numerous times if he would write an autobiography.
"He would always dismiss the question with the wave of his hand," writes Sarito Carol Neiman in her foreword. "[He] would say his biography is to be found in the sum of his work – in his hundreds of volumes of published talks, and in the transformed lives of the people he touched." In fact this "autobiography" is just that – a collection of interviews (including excerpts from appearances on Good Morning America and 60 Minutes), personal essays, and quotes. Disjointed as this material may sound, the editors behind the project were able to piece together a smooth autobiography that does not shy from self-criticism or the fundamental question of whether Osho was a "Cult Leader," "Joker," "Master," or "Zorba the Guru." (The answer, of course, is all of the above.) Followers and seekers will find this a profound and playful collection of stories and teachings.
Gail Hudson

InnerSelf Magazine
"I enjoyed reading this book... While it presented the history of Osho and of what he calls "his people", it also presents a look at our society and at ourselves, and presents a new way of living and being that brings a more balanced perspective to our life. Osho suggests that we need to make the changes within and then live the change so that we become an example to follow, rather than someone who tries to change others and convert them to our point of view."
More Information