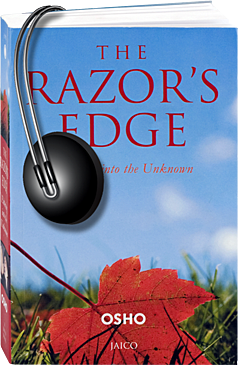 This series of questions and answers reveals the unique relationship of immense love and trust between Osho and those who ask him for guidance on their path. Osho illuminates the very essence of each question and gives his uniquely tailored responses.

This series of questions and answers reveals the unique relationship of immense love and trust between Osho and those who ask him for guidance on their path. Osho illuminates the very essence of each question and gives his uniquely tailored responses.

Excerpt from: The Razor's Edge, Chapter 10

“I have been trying in many ways to open new doors. One of the most important doors is that I want you to be a seeker of truth, but when you have attained truth you should not be without songs and without dances. Beauty has a little lower value than truth, but the man of truth can express beauty more clearly than the poet, than the painter. For the higher, the lower is always understandable – not vice versa.

“The man who has attained truth should also take care that his life radiates godliness, goodness. It may not be in tune with the morality of the society; it cannot be because that morality is created by blind, unconscious people just as a convenience. For the man of truth it is not a convenience, it is simply his life. In utter nudity, he should make his life available to existence, to people, so that the ordinary morality of conveniences slowly, slowly changes into a real and authentic morality of a man who knows the truth.

“The man of truth should not look at poetry, music, dance as just entertainment for ordinary people. He should make it a point because he has risen to a height from where he can see beauty in its absolute glory. He can contribute many riches to existence: each of his words can be a poem in itself, each of his silences can become celestial music, each of his gestures can indicate toward the most beautiful phenomenon – grace.

“This has not been so up to now; they have all followed their paths separately. I want my people to seek the truth because by seeking it the other two will become available on their own accord. But remember, when you have experienced truth don’t forget that it is part of your compassion to give humanity new dreams of goodness, new visions of morality, ethics; which are not of the marketplace, and are not only conveniences. And he should not forget that his truth is so deep inside him that the unconscious people will not be able to have a taste of it – he should create beauty in all possible dimensions.” Osho