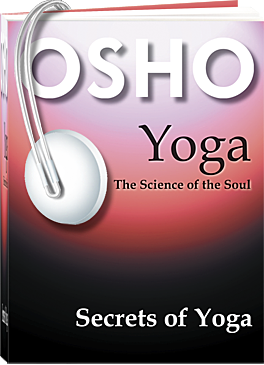 Talks on the Yoga Sutras of Patanjali
Vol. 8 of the Series: Yoga: The Science of the Soul

Osho takes the reader on a journey through the ancient sutras compiled by Patanjali, dissecting, translating, illuminating in intricate detail – and also responds to questions from a contemporary international audience. He understands the sutras intimately, from a mystic’s down-to-earth viewpoint.

Osho takes the reader on a journey through the ancient sutras compiled by Patanjali, dissecting, translating, illuminating in intricate detail – and also responds to questions from a contemporary international audience. He understands the sutras intimately, from a mystic’s down-to-earth viewpoint.

Excerpt from: The Secrets of Yoga, Chapter 3

“The truth cannot be thought, it can only be received. It is already there and there is no way to think about it. The more you think, the farther away you will wander from it; thinking is a wandering, a rambling in the clouds. The moment you think, you are already going away – the truth has to be seen, not thought.

“Patanjali’s basic approach is how to create the clarity, the eyes, which can see it. Of course it is going to be hard work; it is not just poetry and dreaming. A man has to become a lab, a man has to transform his whole life into an experiment – only then can the truth be realized.

“So while listening to Patanjali’s sutras, never forget that he is not handing you some theories, he is giving you a methodology that can transform you. But then it depends on you.

“Then there is the fourth state, or the fourth type. I will call it the devotee. The disciple is ready to change himself, but still not ready to sacrifice himself. The devotee is ready to sacrifice himself. The disciple will go far enough with Patanjali, but not to the very end unless he becomes a devotee also, unless he comes to recognize that the transformation that religion is concerned with is not a modification. It is not just modifying you, making you better and better; it is a death, and one has to sacrifice oneself totally. It is a discontinuity with your past.