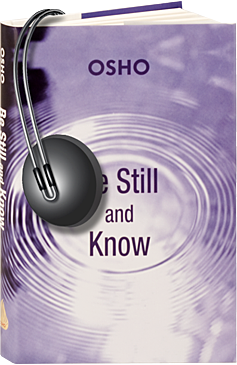 Be Still and Know

Audiobook Series — Also available in other formats: eBook Series
$19.90 Now $14.99 (Applied at Final Checkout)
In stock
Osho speaks on the death and enlightenment of his father. Responding to questions on a variety of subjects, he reminds us that consciousness is eternal, beyond body and beyond mind – death is not an end, but a celebration.

Details
Osho speaks on the death and enlightenment of his father. Responding to questions on a variety of subjects, he reminds us that consciousness is eternal, beyond body and beyond mind – death is not an end, but a celebration.
Excerpt from: Be Still and Know, Chapter 1
"Science has not been able to demystify existence. Now this is recognized not by ordinary technicians but by geniuses, because they are the pioneers; they can see the dawn very close by, they are the prophets. Albert Einstein says that science has failed in demystifying existence, that on the contrary it has mystified things even more.

"For example, it was so easy in the old days, just a hundred years ago, for the scientist to say that all is matter. Now matter has disappeared; in neo-physics there is no entity called matter. The deeper the physicist went into the world of matter, the more matter was not to be found at all – it is pure energy. How to define energy now? Is it material? Energy cannot be material; energy is something totally different from matter. Matter is static, energy is dynamic; matter is a noun, energy is a verb. Matter is measurable. That is exactly the meaning of the word matter; it comes from measure, the root means measurable. Matter can be measured, that’s why it is called matter. Energy is immeasurable, it cannot be called matter. And as the physicist has entered into the world of energy, he has become more and more puzzled; never before has he been so puzzled.

"Mystics have always been in awe before existence. The physicist is for the first time in awe, because he has for the first time touched something very vital; otherwise he was just looking from the outside. A stone is just a stone from the outside. The physicist now knows that the stone is not just a stone – it contains universes. A single small pebble that you can hold in your hand contains so much atomic energy that the whole universe can grow out of it, contains so much atomic energy that the whole universe can be destroyed by it. It is not just a pebble any more and it is not solid anymore. You are holding it in your hand and you know it is solid, but your knowing is no longer scientific. It only appears solid; it is liquid."Osho
More Information