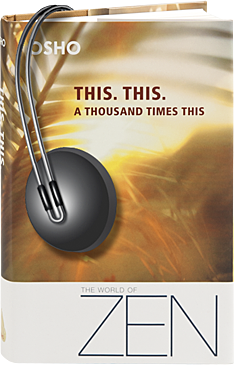 This. This. A Thousand Times This: The Very Essence of Zen

Audiobook Series — Also available in other formats: eBook Series
$29.85
In stock
Through his commentaries on anecdotes about Zen masters Osho reiterates that Zen is not for the mass-mind but only for the individual who is unconcerned with the dictates of the status quo.

Details
Through his commentaries on anecdotes about Zen masters Osho reiterates that Zen is not for the mass-mind but only for the individual who is unconcerned with the dictates of the status quo.
Excerpt from: This. This. A Thousand Times This
"I am giving you a second new meditation – because since Gautam Buddha, not a single new meditation has been evolved. This meditation will be the preface for the coming series on Zen.

"I have talked about the meditation, and a group of people have done it for twenty-one days. But all of you have not been participants. At the beginning of this series, be a participant in this meditation called the Mystic Rose.

"It has four steps. All are designed for a particular purpose: to bring out all the poison from your being that has been injected by every generation for centuries. Laughter is the first step. One of the great writers, Norman Cousins, has written just now of his life-long experiment: that if he laughs for just twenty minutes without any reason, all his tensions disappear. His consciousness grows; the dust disappears.

"You will see it for yourself. If you can laugh without any reason, you will see something repressed within you… From your very childhood you have been told not to laugh: "Be serious!"You have to come out of that repressive conditioning.

"The second step is tears. Tears have been repressed even more deeply. It has been told to us that tears are a symptom of weakness. They are not. Tears can cleanse not only your eyes, but your heart too. They soften you, they are a biological strategy to keep you clean, to keep you unburdened.

"It is now a well-known fact that fewer women go mad than men. And the reason has been found to be that women can cry and weep more easily than men. Even to the small child it is said, ‘Be a man! Don’t cry like a woman!’ But if you look at the physiology of your body, you have the same glands full of tears whether you are man or woman.

"It has been found that fewer women commit suicide than men, and of course, no woman in history has been the cause of founding violent religions, wars, massacres.

"If the whole world can learn to cry and weep again it will be a tremendous transformation, a metamorphosis. The third step is silence. I have called it ‘The Watcher on the Hills.’ Become as silent as you are alone, on the top of an Himalayan peak – utterly silent and alone, just watching, listening…sensitive, but still.

"And the fourth step is let-go." Osho
More Information