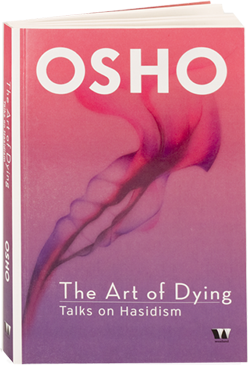 Skip to the beginning of the images gallery
Available In
English

The Art of Dying

Details
Osho brings a completely different perspective to the art of dying – and shows it to be the art of living. These commentaries on classic Hasidic tales are full of color, music, laughing saints, wonderful events, and inner transformation.
Excerpt from: The Art of Dying, Chapter 1
"Life is in living. It is not a thing, it is a process. There is no way to attain to life except by living it, except by being alive – flowing – streaming with it. If you are seeking the meaning of life in some dogma, in some philosophy, in some theology, that is the sure way to miss life and meaning both.

"Life is not somewhere waiting for you, it is happening in you. It is not in the future as a goal to be arrived at, it is herenow, this very moment – in your breathing, circulating in your blood, beating in your heart. Whatsoever you are is your life, and if you start seeking meaning somewhere else you will miss it. Man has done that for centuries.

"I have heard a very beautiful story.

"Some years ago a successful American had a serious identity crisis. He sought help from psychiatrists but nothing came of it, for there were none who could tell him the meaning of life – which is what he wanted to know. By and by he learned of a venerable and incredibly wise guru who lived in a mysterious and most inaccessible region of the Himalayas. Only that guru, he came to believe, would tell him what life means and what his role in it ought to be. So he sold all his worldly possessions and began his search for the all-knowing guru. He spent eight years wandering from village to village throughout the Himalayas in an effort to find him. And then one day he chanced upon a shepherd who told him where the guru lived and how to reach the place.

"It took him almost a year to find him, but he eventually did. There he came upon his guru, who was indeed venerable, in fact well over one hundred years old. The guru consented to help him, especially when he learned of all the sacrifices the man had made towards this end. ‘What can I do for you, my son?’ asked the guru.

"Nobody can give you the meaning of your life. It is your life, the meaning has also to be yours. Himalayas won’t help. Nobody except you can come upon it. It is your life and it is only accessible to you. Only in living will the mystery be revealed to you." Osho
In this title, Osho talks on the following topics:life… objective… understanding… love… search… play… outside… adam… bokoju… mahavira
More Information