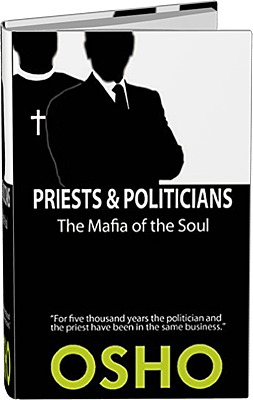 Priests and Politicians: The Mafia of the Soul

Details
"For five thousand years the politician and the priest have been in the same business."
OSHO On Priests and Politicians
OSHO on the conspiracy:


“The politicians have been selling hope for thousands of years, the priests have been selling hope. And it is strange that after such a long time, they are still doing business. The man seems to be fast asleep, without looking at the whole strategy. The priests and the politicians have to disappear from the earth. Only then the new man – rich, comfortable, skillful, creative – can come into being.“

OSHO on the motivation of Priests and Politicians:

"All the educational systems prevalent in the world are nothing but strategies to create ego trips, to create ambitious minds. Priests and politicians support them because if ambition is not inflamed in you, there will be no politics; if ambition is not inflamed in you, you will never feel frustrated. A non-ambitious man never feels frustrated. Why should he feel frustrated? He never expected anything in the first place; you can't frustrate him."