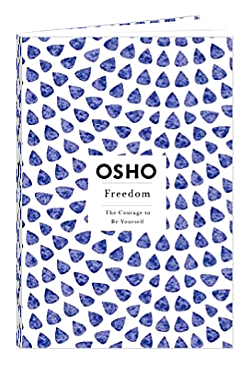 The Courage to Be Yourself
Book — Also available in other formats: eBook
$0.00
Out of stock
In a special selection from Osho’s many talks, this book explores the three kinds of freedom and what role each of them plays in the human search for an authentic way of living.
Add to Wish List
In Freedom Osho outlines three stages of freedom. The first is "freedom from," which is a freedom that comes from breaking out of what he calls the "psychological slavery" imposed by outside forces such as parents, society, or religion. The next stage is "freedom for," a positive freedom that comes from embracing and creating something – a fulfilling relationship, for example, or an artistic or humanitarian vision. And lastly there is "just freedom," the highest and ultimate freedom. This last freedom is more than being for or against something; it is the freedom of simply being oneself and responding truthfully to each moment.
Chapter Titles
FOREWORD
Three Dimensions of Freedom
UNDERSTANDING THE ROOTS OF SLAVERY
#1: Society and Freedom of the Individual - an Interview
#2: The Problem of God
#3: The Idea of Fate and Destiny
#4: Fear of Flying
PATHS TO FREEDOM
#1: Camel, Lion, Child
#2: From Love to Lovingness
#3: From Reaction to Action
#4: Rebellion Not Revolution
OBSTACLES AND STEPPING STONES
Responses to Questions

Details
In a special selection from Osho’s many talks, this book explores the three kinds of freedom and what role each of them plays in the human search for an authentic way of living.
Excerpt from Freedom
"Man has not come to the point where governments can be dissolved. Anarchists like Kropotkin have against the government, the law. He wanted to dissolve them. I am also an anarchist, but in a totally opposite way to Kropotkin.
"I want to raise the consciousness of human beings to the point where government becomes futile, courts remain empty, nobody is murdered, nobody is raped, nobody is tortured or harassed. Do you see the difference? Kropotkin’s emphasis is to dissolve the governments. My emphasis is to raise the consciousness of human beings to the point where governments become, of their own accord, useless; to the point that courts start closing, that police start disappearing because there is now work, judges are told, "Find some other job."I am an anarchist from a very different dimension. First let people be ready, and governments will disappear on their own. I am not in favor of destroying governments; they are fulfilling a certain need. Man is so barbarous, so ugly, that if he is not prevented by force, the whole society will be in a chaos.
"I am not in favor of chaos. I want human society to become a harmonious whole, a vast commune all around the world: People meditating, people without guilt, people with great serenity, silence; people rejoicing, dancing, singing; people who have no desire to compete with anybody; people who have dropped the very idea that they are special and have to prove it by becoming the president of America; people who are no longer suffering from any inferiority complex, so nobody wants to be superior, nobody brags about his greatness.The governments will evaporate like dewdrops in the early morning sun. But that is a totally different story, a totally different approach. Till that moment comes, governments are needed.
"It is a simple thing. If you are sick, medicines are needed. An anarchist like Kropotkin wants to destroy the medicines. I want you to be healthy so you don’t need medicines. Automatically you will throw them out – what will you do with all those medicines? They are utterly useless, in fact, dangerous; most medicines are poisons. For what purpose will you go on accumulating them? See the difference of emphasis.
"I am not against medicines, I am against the sickness of human beings which makes medicines necessary. I would like a healthier human being – which is possible with genetic engineering – a human being who has no possibility of becoming sick because we have programmed him from his very birth in such a way that he cannot be sick, we have made arrangements in his body to fight against any sickness. Certainly medicines would disappear, pharmacies would disappear, doctors would disappear, medical colleges would be closed. But I am not against them! That will be simply a consequence of a healthy humanity.
"I want one world, one language, one religiousness, one humanity – and when humanity is really grown-up in consciousness, one government.
"Government is not something to brag about. It is an insult. Its existence says to you that you are still barbarous, civilization has not happened; otherwise what is the need of a government to rule you?
"If all the crimes disappear, if all the fears that others can exploit you, murder you, disappear, what will you do with this whole bureaucracy of government? You cannot continue it, because it is a burden on the economy of the nation, a big burden, and it goes on becoming bigger and bigger. The hierarchies have a tendency to become bigger and bigger for the simple reason that everybody wants not to work, everybody hates work. So everybody needs more assistance; the work is growing.
You can see, in any government office, files just piled up on the tables. Unless you are able to bribe someone, your file may remain somewhere in the huge pile, it will never come to the top. And the bureaucrats enjoy having many files there; it makes them big, special. They have power over so many people; in their minds, all these files contain their power over people.
"I am an anarchist of a totally different category from all the anarchists who have existed on the earth. I am a category in myself, because my approach is totally different. I am not against government, I am against the need for government. I am not against the courts, I am against the need for the courts.
"Someday, some time, I see the possibility that man will be able to live without any control – religious or political – because he will be a discipline unto himself." Osho
More Information
Related Products