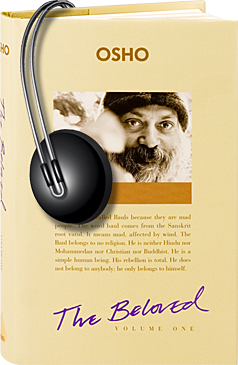 Osho takes us on a journey into the lives and poetry of the Bauls of Bengal. Known as wildly ecstatic traveling mystics, the Bauls are wanderers. With their musical instruments they dance like a whirlwind and sing devotional poems.

Osho takes us on a journey into the lives and poetry of the Bauls of Bengal. Known as wildly ecstatic traveling mystics, the Bauls are wanderers. With their musical instruments they dance like a whirlwind and sing devotional poems.

Excerpt from: The Beloved, Vol. 1, Chapter 1

“I am tremendously happy to introduce you to the world of the Bauls. I hope you will be nourished by it, enriched by it. It is a very bizarre world, eccentric, insane. It has to be so. It is unfortunate but it has to be so because the world of the so-called sane people is so insane that if you really want to be sane in it, you will have to be insane. You will have to choose a path of your own. It is going to be diametrically opposite to the ordinary path of the world.

“The Bauls are called the Bauls because they are mad people. The word baul comes from the Sanskrit root vatul. It means mad, affected by wind. The Baul belongs to no religion. He is neither Hindu, Mohammedan, Christian, Buddhist. He is a simple human being. His rebellion is total. He does not belong to anyone; he only belongs to himself. He lives in no-man’s-land – no country, no religion, no scripture is his. His rebellion goes even deeper than the rebellion of the Zen masters – because at least formally they belong to Buddhism, at least formally they worship Buddha. Formally they have scriptures; of course, scriptures denouncing scriptures, but still they have them. At least they have a few scriptures to burn.

“The Bauls have nothing; not even a scripture to burn. They have no church, no temple, no mosque – nothing whatever. A Baul is a man always on the road. He has no house, no abode. God is his only abode and the whole sky is his shelter. He possesses nothing except a poor man’s quilt, a small, handmade, one-stringed instrument called an ektara, and a small drum, a kettledrum. That’s all he possesses. He possesses only a musical instrument and a drum. He plays with one hand on the instrument and beats the drum with the other. The drum hangs by the side of his body and he dances. That is all of his religion.