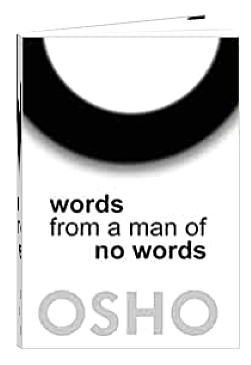 Words from a Man of No Words

“I teach you to be authentic, integrated individuals with immense self-respect.”
Osho

Details
Open this book anywhere and you will come upon such a depth of wisdom, such utter truth, that even just a sentence can be the start of a new way of looking at life, a new way of living life to the fullest.
Excerpt from: Words from a Man of No Words
Every crowd is a motley crowd, but no individual is motley. Every individual is an authentic consciousness. The moment he becomes part of the crowd, he loses his consciousness. Then he is dominated by the collective, mechanical mind. I am doing a simple thing – bringing out individuals from the motley crowds, giving them their individuality and dignity.

Consciousness makes one an individual – a solitary pine tree dancing in the wind, a solitary sunlit mountain peak in its utter glory and beauty, a solitary lion and his tremendously beautiful roar that goes on echoing for miles in the valleys.

The crowd is always of sheep; and all the efforts of the past have been to convert every individual into a cog in the wheel, into a dead part of a dead crowd. The more unconscious he is and the more his behavior is dominated by the collectivity, the less dangerous he is. In fact, he becomes almost harmless. He cannot destroy even his own slavery.